I went to the Allergy Show knowing full well I’d find something there (among all of the delicious treats) to make me a bit cross. Thankfully this year I didn’t encounter any spurious ‘intolerance tests’ and I did my best to float past the nutribabble snacks and knit-your-own yogurt kits on a cloud of (refined) sugar. Largely because I already knew what I wanted to find out between cake shopping – was there really a stall with pills claiming to help me eat gluten? Yes, there was. 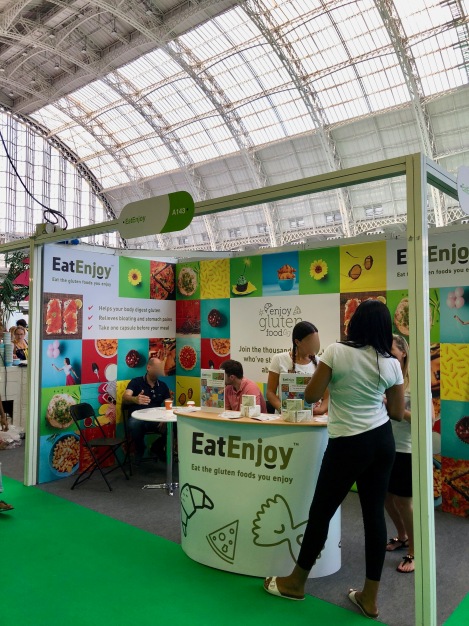 Eat Enjoy Gluten pills contain a blend of enzymes which claim to break down gluten and offer symptom relief; which could, technically, be possible. They’ve done some research, and some clinical trials. And on the face of it, the uninitiated may think ‘oooh, some science, that’s brilliant, I can eat like a normal human again!’. But let’s dig a little deeper. 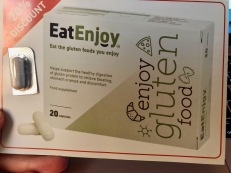 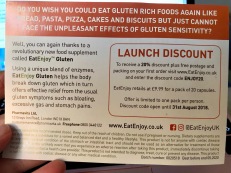 To be fair, Eat Enjoy (the manufacturer in question) are pretty clear that their ‘Eat Enjoy Gluten’ pills are not for those with coeliac disease. Well sort of. “They might be helpful if you’re eating out and there’s cross contamination” says the rep on the stand. Gulp. If that were true, the pill would have to break down the gluten to such a degree that my coeliac immune system didn’t recognise it – there is no evidence that it can do this. In fact, the only published trials on an enzyme of this kind (albeit not the same enzyme) suggested that even when broken down, the coeliac immune response and damage to the gut is still triggered. (ref), not promising; and Eat Enjoy don’t offer any data that suggests their particular blend of enzymes does any better in people with Coeliac Disease. In short, suggesting that people with coeliac use this in any circumstances could be endangering their health.

It gets muddier still from there. Given that coeliac disease is currently the only verifiable gluten-related health disorder, and they aren’t really for coeliacs, who are they for? People who experience “usual gluten symptoms such as bloating, excessive gas and stomach pains” say the flyers. Let’s ignore the fact that they consider gluten symptoms ‘usual’ (my wheat-munching family would certainly dispute it), and talk about gluten intolerance.

The science goes back and forth on this issue – the latest (ref) seems to suggest that in most cases it’s not the gluten protein in the gluten-containing foods that triggers these symptoms; but some of the carbohydrates which are types of FODMAP, or perhaps other proteins in wheat. If this is the case, degrading the gluten is going to do absolutely nothing for most individuals experiencing what they perceive as ‘gluten intolerance’.

And yet, there’s the data saying it works. Let’s look at the data. One clinical trial is available on their own site (there is apparently another, larger, one; but I could not track it down). The trial showed that of 11 (self-diagnosed, because we can’t test for it) gluten intolerant people (there were 20, but 9 dropped out of the study); the ones given the pill (lets assume half) reported that their symptoms improved when they took the pill but carried on with their usual diets. We do not know how much gluten they ate in their usual diets as it doesn’t appear in the study write up, and whether this was constant.

Let me ask you – did you fart more or less this week than last week? Did your tummy rumble more loudly on the 5th June or the 20th of June? I expect you might have a hard time answering that. This type of questionnaire-based study does have a place; but 6 people’s subjective view of their symptoms isn’t a very strong basis to be selling a pill.

So what do we have? A pill for a condition that may not exist and cannot be diagnosed, that may or may not do what it says it does, that is being marketed in a way that could endanger some people’s health. I find myself wondering how they can get away with it (and what on earth the Allergy Show were thinking allowing them to have a stand).

The funny thing is, that because this is not actually a drug, but a dietary supplement, the rules around how it can be promoted are not as strict as you might expect. It’s a loophole that those of us with diet-related medical conditions often fall foul of – the pill doesn’t treat your condition, but does something to the food you eat. As such it doesn’t need to satisfy board of regulators, scientists and NHS committees that it’s worth your while to take. Instead they can launch it direct to consumers for £9.99 a packet (that’s £1.50 a day if you take their recommended 3 pills a day), with some tenuous claims and see what happens.

My recommendation? Avoid – whether you have coeliac or not. There are numerous other candidate treatments for coeliac and gluten-related illnesses being developed, and they are putting a degree more rigour into their science. Until then, your best defence against gluten-related symptoms is to do everything you can to avoid gluten-containing and gluten-contaminated foods; and if you’re not coeliac, to work with a medical professional to get to the bottom of why it causes you trouble.

2 responses to “I’m really sorry, there isn’t a pill for gluten intolerance (yet).”