The picture above is of some of the products I returned with from the BBC Good Food Eat Well Show in the ExCel Centre. Some I purchased, most were in the show goody bag. All, presumably, had a presence at the show in order to reach their target market – people interested in ‘eating well’.

But what does that even mean? You can see from this baffling assortment of products that it’s either wholly ambiguous, or very confused. Or at least it means something different to everyone, with highly contradictory messages across the breadth of suppliers, societies and celebrity chefs in attendance. It seems no wonder that the media is awash with confusing public messaging about diet and health with marketing money behind such an eclectic mix of messages about what to eat for good health.

Because that’s what I assume they mean by ‘eat well’. Not, as I had understood from the phrase, to eat a lot; probably of freshly prepared, nutritious (but not restrictively so) food. “She eats well” we say of my toddler, who polishes off seconds of meat, pasta and veggies followed by pudding. Nope, not that.

It seems BBC Good Food are more trading on the ‘wellness’ movement, as in eating to be well. So Hemsley² took to the stage and that Alkaline woman had a stand, and pretty much everyone was marketing on the unrefined/natural sugar content of their products. “It’s got better nutritional value, lower GL” I overheard more than once about coconut/unrefined cane/insert non-white sugar of choice.

So far, so much woo, but then front and centre were the BDA offering 1-1 consultations with dietitians (them with the evidence and science), and hidden away next to some raw chocolate stand or other were Coeliac UK; which I applaud, but gosh what a pickle. Having those with credible messages, responsible marketing and nutritious products interlaced with fads, nonsense, and a lot of companies happy to trade on people’s misunderstanding of what they can’t/shouldn’t eat (gluten/sugar/grains) just makes me worry and wonder what on earth the right approach is.

Does having the BDA next to naturopathic nonsense lend the latter credibility when it’s vying for the consumer’s attention? Or should the good guys join in the game, because it’s marketing from the baddies that gives people the wrong ideas about nutrition, and they need to be beaten at their own game? What a quandry. 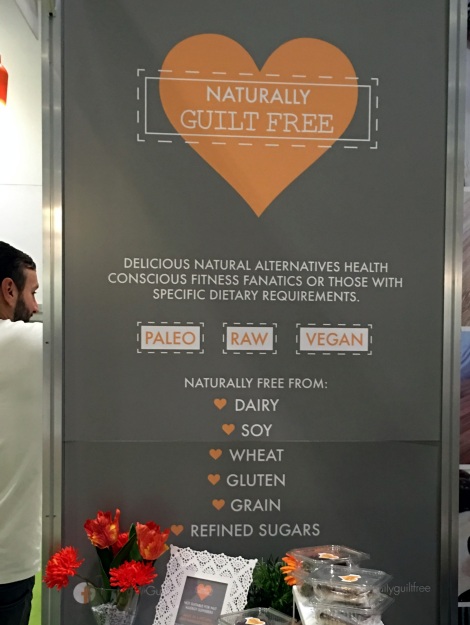 I didn’t really like what this show did to me. Enquiring “is it gluten free?” of samples, then hastily changing my question to “is it suitable for coeliacs?” so I didn’t sound like a fussy worrier. Then worrying that doing that in itself was snobbery about non-coeliacs avoiding gluten for other health reasons. I spent some time ‘spotting’ those stalls marketing themselves as ‘guilt free’ and asking for the rationale. “We can’t use ‘healthy’ because it’s a health claim” said one (honest, at least) “It doesn’t have sugar, dairy, grains or gluten” said another. “Should I feel guilty about eating those things?” (nervous laughter).

Gosh what a bitter woman I am! I just find it so frustrating that really interesting (and in some cases delicious) products that would suit my dietary needs and preferences let themselves down with nonsense marketing.

I don’t want you to think I didn’t find any good guys, or good things at the show. I had great fun experimenting with the Protein Pow mix I use regularly at home to prepare my own post-workout snacks, and a lovely chat with the other people in the workshop who’s approach to nutrition seemed pretty aligned with my own (“just have the proper damn cake, in moderation”). There were several artisan producers with delicious products proud of their wares, and a scattering of free-from natives like Perkier and Bakels to keep this coeliac happy. I also had lot of fun spending my pennies on Japanese bento gadgets for A’s packed lunches. 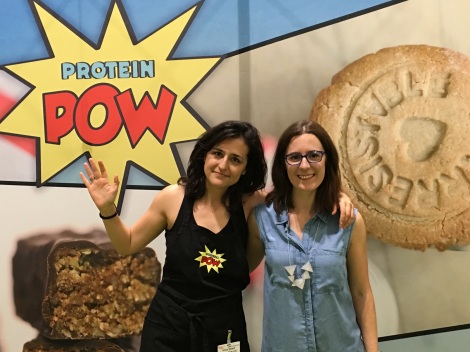 But for a show about eating for wellness, there was limited evidence of (to my mind) the central tenets of good nutrition – good quality fresh produce. I guess the broccoli growers don’t have the marketing budget? I get that this was no farmers market, but there weren’t even any savoury products – it seems that the industry around wellness is centred around the central aim of having your cake (/chocolate bar/snack bar/sweets) and eating it, and kidding yourself it’s nutritious at the same time to spare your own feelings.

3 responses to “What is ‘eating well’ anyway?”