In my recent post ‘have we reached peak gluten free?‘ I resolved to make this blog a little more ‘issue based’. Well here’s an issue for you! In the same post, I decried the all-too-frequent implication of health benefits of the gluten free diet by gluten free manufacturers; a tide of which has made me feel fed up rather than angry.
I had all but forgotten that shortly before getting fed up, I had been angry. Specifically at this piece of promotion by Genius Foods on Mumsnet: 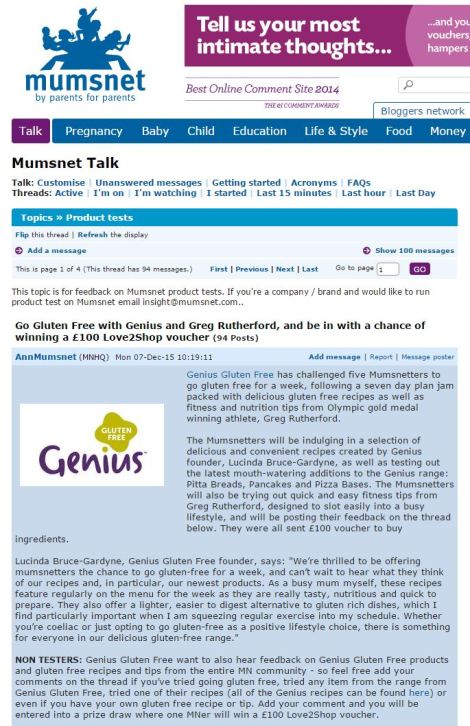 (Further commentary on this by Alex G here.)
In fact I was moved to make a complaint to the Advertising Standards Authority about it. Although I didn’t know the ins and outs of advertising regulations, intuitively I felt that surely you can’t make un-evidenced health claims for a product? My complaints were:

As you can see, probably all things that are true of many gluten free manufacturers. Perhaps it was the blatant targeting of mums, potentially worried about weight loss that got my goat in this case. I submitted my complaint and then Christmas happened and I didn’t think more of it until a reply popped into my inbox in mid February.

You can scroll down to see the full reply from the ASA, but in short, they didn’t uphold my first two complaints, but they are upholding the second two- they do believe Genius breached the code because they made references to ‘general benefits’ without specific authorised health claims (i.e. backed by evidence). Genius are going to be instructed to make sure they don’t do this in the future, and the case will be put on the ASA website.

Of course it’s too late to undo any damage done by this particular promotion, but let’s hope it has an impact on Genius’ future campaigns.

Perhaps I shouldn’t hang up my coeliactivist hat just yet. There is a system in place to stop the proliferation of nonsense being used to sell bread (cakes, convenience foods, health products…), and we shouldn’t be afraid to use it. Even if you don’t go so far as complaining about a manufacturer, you can point them to this case and confidently ask them for the evidence that their vague promotional claim is based on. Maybe slowly but surely we can stem the tide of gluten free nutribabble; one health claim at a time.

Full reply from the ASA:

“I should say straight away that we are not proposing further action in regards to your first two points of concern however we do think you have a valid point regarding your third and fourth points of concern.  While we can understand your concern that the promotion implies an association between the product and fitness, we noted the promotion suggests participants follow a seven day plan which includes gluten free recipes “as well as fitness and nutrition tips” from Greg Rutherford.  The promotion does not make any direct connections between the food and Greg’s athletic success or make any explicit fitness related claims about the food and therefore we consider it unlikely there is a breach of the Code on this basis.  Regarding your concerns about the who the promotion may be targeting, we noted the promotion encouraged ‘non-testers’ to share things they’re experiences and things they’ve tried rather than try something new and consider there was nothing in the ad which directly targeted new mothers or indicated the ‘Genius Testers’ were not appropriate participants.  Consequently we consider the promotion unlikely to override the readers own knowledge of safe and healthy behaviours for their diet.

Nonetheless, having consider you third and fourth points of concern we think you have a valid point.  The CAP Code which we administer contains rules which reflect the EC Regulation 1924/2006 on Nutrition and Health Claims made on Foods. Under the CAP Code only ‘health claims’ listed as authorised in the EU Register may be used in marketing communications and ‘references to general benefits’ are acceptable only if accompanied by a specific authorised health claim.  In this instance we consider “a positive lifestyle” likely to be a reference to a general benefit of a food and “lighter, easier to digest alternative to gluten rich dishes” likely to be an unauthorised health claim.  Therefore with a view to acting quickly, we’ll instruct the advertiser to ensure that future ads and promotions contain only health claims authorised in the EU Register, and that references to general benefits of a nutrient or food are accompanied by a specific authorised health claim.  We will get an assurance from them that they will make these changes.

We shouldn’t need to contact you again.  However, once we’ve resolved your complaint, basic information including the advertisers’ name and where the ad appeared will be published on our website, www.asa.org.uk.  If the advertisers don’t co-operate with us, we may have to think about other ways to resolve your complaint, including conducting a formal investigation that involves the ASA Council.  If that happens, we’ll contact you again.

Thank you for taking the time and trouble to write to us.  If you’d like some more information about what we do and the action we’ve taken against advertisers who break the code, please have a look on our website.