The Official Gluten Eating Husband is not a fan of morning times. He’s baffled that he has to arrange his getting-up routine around my breakfast. He doesn’t understand why I spring out of bed and instantly head for the kitchen. And on occasion he has groaned at being woken up by a bowl of porridge exploding in the microwave.

The reason for the daily pain of eating breakfast before my body has properly woken up is that unless I want an insubstantial piece of fruit in the morning, there’s not a gluten-free breakfast I can have in the office. Until now.

My long-term favourites, Perkier, have finally launched into the big time, not just with their existing range of gourmet (cake for breakfast) porridges; but with the ultimate convenience version – an instant pot I can make with just hot water at work. Hurrah!

Anne kindly sent me a taster before they go on general sale at Ocado in April. Fully aware that I am breaking my first two rules of social media (never tweet your breakfast, don’t write about freebies), I enlisted the help of a colleague at work to tell you how it shapes up compared to the other porridge pot that just launched onto the market from oaty rivals, Nairns. Since, Tesco have also launched porridge pots of their own. Everyone’s getting in on the act! Here’s our verdict:

We both liked the ease of preparation – just add boiling water and wait for 2 minutes, but whether because our ‘boiling’ zip tap in the office is just shy of 100°c or maybe because the ‘fill to about here’ line is too high; found the consistency of the porridge a little watery for our tastes. Less water will be added next time! Should have followed Mrs D’s advice! Also – you need to remember a spoon.

Dixie, who normally loads her porridge with sugar, liked the natural sweetness from the fruit and the way the apples plumped up in the Cinnamon  Apple & Raisin flavour pot. They also pack a punch on the fibre content – all good stuff and very satisfying. The Fruity Berry pot is more strongly flavoured – wafts of strawberry hit you as soon as you add the water. yum!

All in all a great, filling breakfast – and the lovely bright packaging drew comments of appreciation from neighbouring desks.
Dixie gave a GF Nomability score of: 8/10

Porridge is just the ticket after a cold walk to work!

The first test of Nairn’s pot did not go to plan due to tester error. (Alright, it was me, I added cold water by mistake). Round 2 was more successful despite also needing to beg the canteen for a spoon. The pot wins points for being slightly more insulated than the Perkier pot, so your fingers won’t get burnt, although you will be waiting a stomach-rumbling 4 minutes for your porridge to be ready.

Filling to the line makes a thicker consistency porridge than Perkier’s, but still not as thick as I like it. The powdered milk gave a slightly gluey, viscous texture – not quite as nice as traditionally made porridge. It is a slightly cheaper option, probably because it lacks the flavourings of its Perkier counterpart, so whilst sweeter (due to sugar as an ingredient), I found it a little bland – I didn’t dare risk the canteen’s cinnamon shaker to pep it up in case of hidden gluten.

All in all, a good warming pot, but personally I like a bit more taste to my breakfast. 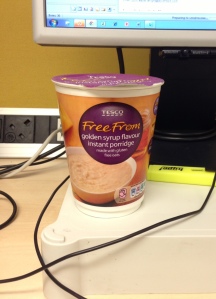 Late to the party, but dairy free!

The smallest by weight, and lowest in calories, this pot is the only dairy-free pot of the bunch. It compensates with inclusion of some curiously non-porridgey ingredients including rice starch and enigmatic ‘flavourings’. Having learnt my lesson from the previous porridges, I filled to just below the line for a reasonably thick consistency; but the amount was a little disappointing compared to the size of the pot – less than half filled.

As soon as the water hit the oats, there was a delicious smell of golden syrup. The eagle-eyed among you will have noticed it is golden syrup ‘flavour’ and not ‘flavoured’ – there’s no syrup in the ingredients, the porridge is sweetened with rice syrup and sugar, but I didn’t feel short-changed on flavour. As a bonus, only 1 minute to wait to eat.

Unfortunately the appearance was less than attractive -very grey and gloopy, the texture was also very viscous. But not a bad effort, and will certainly please those who need to avoid milk.
An overall score of: 6/10

How the pots stack up: